Most boards, leadership teams and married couples for that matter, are destined to live in dysfunction because of what Dr. Jerry Harvey called the Abilene Paradox. I first heard Dr. Harvey in 1996 while attending Graduate School at the University of Texas at Austin. Jerry got his Ph.D. from UT in psychology, practiced as a management consultant, and taught at George Washington University. He built a consulting model around the Abilene paradox, which helps explain why most organizations fall short of achieving unified leadership, optimal organizational health, and peak performance cultures.

In a typical Abilene Paradox scenario, a team, which could be a married couple or a large multinational corporate board, collectively decides on a course of action that is counter to the preferences of many or all its participants. It involves an all-too-common breakdown of group communication in which each member mistakenly believes their own opinions run counter to the group’s and for that reason, does not raise objections or offer alternatives. Individuals in this scenario don’t want to “rock the boat.” It was in fact Jerry’s thesis that organizations do not have as big a problem managing conflict as they do managing agreement. Agreement, that in many cases displeases individual team members, and often leads to decisions that take organizations to places none of its members want to go.

To illustrate, Jerry shared a true story about a hot, miserable June 1961 afternoon in Coleman, Texas when he, his new bride and in-laws drove fifty-three miles to Abilene in an unairconditioned 1958 Buick to have dinner at a crappy cafeteria. This trip to Abilene, on which no one wanted to embark, occurred because Jerry’s father-in-law, bored to tears, playing dominoes on the front porch, broke silence by saying “Let’s get in the car and go to Abilene and have dinner at the cafeteria”, to which Jerry’s wife replied, “Sounds like a great idea, I’d like to go, how about you Jerry?” Jerry had no interest in going but not wanting to disappoint his new father-in-law, said “I’d love to go as long as your mother wants to go.” You know the rest of the story. Four hours, 106 miles and an awful dinner later, everyone was upset at Jerry’s father-in-law for suggesting the outing. Jerry’s father-in-law, more upset at the accusation than the others said “Sheeit, I was only making conversation. I never thought you’d take me up on such a stupid idea. I’d have been just as happy to play another game of dominoes and have leftovers out of the icebox.”

Jerry also told the story about Ozyx Corp, a small industrial company that seemed on its way to bankruptcy. As a last resort and in utter frustration, the CEO had hired a consultant to help sort things out and try to avoid the corporate chopping block. The consultant began by conducting one-on-one interviews and quickly determined that morale was at rock bottom, and that leadership team members all seemed paralyzed, dejected, and helpless. He heard repeatedly about a research project around which Ozyx had made bold promises in a huge media splash. The project, to which the company, the president, vice president, and research manager were all publicly committed, was a proprietary technology to turn peanut oil in to jet fuel.

When the consultant privately asked the CEO, the vice president, and the research manager, each described the project as an idea that looked great on paper but that would ultimately fail because the technology to turn peanut oil in to jet fuel simply didn’t work. Privately each admitted that the project was a pipe dream and that a continued commitment to the project would bankrupt the company.

Publicly, in meetings and privately with one another, they maintained an optimistic facade not to worry their colleagues. The research manager admitted to writing ambiguous progress reports so the president and vice president could interpret them any way they saw fit. In fact, he said he slanted them to the positive given how committed his superiors were to the project. You can guess how this one turned out. The consultant was successful in helping stop the madness, but not before irreversible damage had been done. Eight months had been spent in a widely publicized and much ballyhooed commitment to turning peanut oil into jet fuel. The company survived but suffered unnecessary damage because of The Abilene Paradox.

Since our work is all about helping build cultures of peak performance, we often draw on Jerry’s work. As the Abilene Paradox is alive and well in most organizations, I encourage you to read Jerry’s books as we have found them incredibly valuable. The easiest and most entertaining is The Abilene Paradox. The other, which will really make your head explode, is How Come Every Time I get Stabbed in the Back My Fingerprints are on the Knife? The title alone should cause you to drop what you’re doing and order the book. Since time and space preclude me from sharing all of Jerry’s wisdom, I’ll invite you to give us a call.

by Rob Andrews with paraphrased content from The Abilene Paradox by Dr. Jerry Harvey published December 6, 2014 We’ve spoken of the Abilene Paradox, and how recognizing its symptoms is key to avoiding painful and all too … 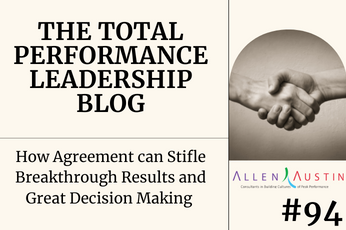 With paraphrased content from The Abilene Paradox by Dr. Jerry Harvey published December 6, 2014 Most boards, leadership teams and married couples for that matter, are destined to live in dysfunction because of what Dr. Jerry Harvey …

With paraphrased content from Helen Tupper and Sara Ellis’s HBR article November 4, 2021 According to Sara Ellis and Helen Tupper, our capacity for learning is becoming the career currency on which we trade. We once went …