TPL Insights: Building Peak-Performance Cultures #80 – Encouraging Your Employees to Give You Critical Feedback

With paraphrased content from Scott Edinger in his Harvard Business Review article August 3, 2021

One of the most valuable things I’ve done over a long career of leading and managing others is to ask the managers and leaders several layers deep in my organization, what I do they appreciate and what I do that drives them crazy. At first, all I got were strange stares, as if people were thinking “Seriously? You’re not really interested in what I think are you?”, and then over time they loosened up and started telling me. While I’m not yet so highly evolved that I enjoy hearing about my character flaws and shortcomings, I’ve always found the feedback incredibly valuable. I came across Scott Edinger’s article in this month’s HBR and thought I’d share the essence of Scott’s message.

It’s been 10 years since I co-authored the HBR article “Making Yourself Indispensable,” with John H. Zenger and Joseph Folkman. In the article we provided a model to get useful and actionable feedback on one’s leadership effectiveness, and how to uniquely develop your strengths in those areas.

As I re-read the article recently, I was struck by a statement we made about using an informal 360 to get feedback from colleagues and direct reports: Do your best to exhibit receptiveness and to create a feeling of safety (especially for direct reports). Make it clear that you’re seeking self-improvement. Tell your colleagues explicitly that you are open to negative feedback and that you will absorb it professionally and appropriately and without retribution. Of course, you need to follow through on this promise, or the entire process will fail.

Unlike formal 360s which usually involve anonymous surveys, informal 360s are based on direct conversations with team members. The informal 360 is incredibly valuable for leaders as a means to seek feedback as well as develop stronger alliances with colleagues. However, as I’ve worked with leaders and teams using informal 360s over the past 10 years, I’ve realized we may have understated the challenges associated with getting actionable feedback from colleagues in this face-to-face assessment format. There are two important points I would like to add to “Making Yourself Indispensable” to help leaders get more out of an informal 360:

I didn’t think we went far enough in stating: “Tell your colleagues that you are open to negative feedback,” implying that would be sufficient to get a direct report to candidly share their thoughts about your weaknesses. Most people are incredibly loath to say anything negative, and it will take some serious effort on your part to enable the people you work with to tell you the truth about yourself — the good, the bad, and the ugly.

I saw this in action recently when I was hired as part of an executive coaching engagement to work with an EVP in a Fortune 500 company. I was talking with the CEO, who had hired me, about the performance of this leader. The CEO shared some very direct examples and feedback about this person that had not been aired quite so candidly in our previous chats. I asked the CEO if he had ever talked with the EVP about this issue, using the precise language he just shared with me. He said no. I asked if I could share his thoughts with the EVP, and he backpedaled, asking if he could think about it first. I share this example to highlight that even for the top executive in the company, it can be tough to share candid feedback if the stage is not properly set.

One benefit of an informal 360 is that whatever is shared between you and the person giving feedback is off the official record, not evaluated by HR or executives. This can open a valuable safe space for evaluators to get real with you about your impact as a leader.

To make this work, you must first promise total amnesty to participants, and I don’t use that term lightly. Simply “creating safety” and “exhibiting receptiveness” (as we wrote in our previous article) are not sufficient for most people to be willing to share the kind of feedback you need to hear. It can be extremely challenging to get people to share their true thoughts about your leadership weaknesses when hearing their honest opinions about any flaws might upset you. This is doubly hard if you have a history of getting angry or shooting the messenger.

You will need to go out of your way to invite opinions that others think you may not want to hear. Tell participants: “I want to hear your real perspectives about the impact I have on you as a leader, even where it’s negative. I promise you amnesty — and that I will not respond defensively or with retribution, even if I don’t like what I hear. I value your perspective.” And then of course, you need to make good on your promise.

You’ll find that it’s easy to get a colleague to share the good stuff you’re doing. People naturally want you to feel good and associate themselves with giving you a lift. But when an executive asks, “Tell me about my fatal flaws,” the response I’ve heard recounted dozens of times is, “Well, it’s not a fatal flaw, but . . . [insert critical leadership problem here].” This is a valuable clue, and you should seriously consider addressing the issue. Being attuned and open to this candid feedback is extremely valuable in your efforts to become an exceptional leader.

While formal surveys can provide a vehicle for sharing comments anonymously, a common criticism is that comments lack depth or aren’t fully clear. The informal 360 stimulates a shift in the way people interact and discuss these comments. And since leadership is, at its core, a relational and interactive skill, the informal 360 facilitates a change in the way leaders discuss performance with their teams.

One beneficial effect of engaging in these open dialogues about areas where you can improve is that, over time, it builds the kind of trust that allows you to be frank with others. This is not to say that when you receive feedback, you immediately turn around and deliver your own feedback to the other person. That old phrase about feedback being a gift doesn’t suggest “regifting” right away. But graciously receiving feedback in the informal 360 can open a more productive dialogue about performance and the impact we have on others.

I’ve observed many instances when a leader was able to create an atmosphere of openness and trust, which changed the way colleagues interacted and discussed performance issues. The informal 360 process establishes accepting the perspectives of others as the norm, even when people may not completely agree. One leader told me that as a result of this process, he and the president of a division had a more valuable relationship because now they could openly address the challenging issues and dissenting opinions that were previously simmering beneath the surface.

It’s powerful when leaders acknowledge their weaknesses, demonstrate their commitment to development, and make changes. The environment of trust you establish by accepting feedback graciously creates a collaborative two-way street. Directness and candor, when provided in the spirit of genuinely helping and supporting the growth of colleagues, can create a dynamic mindset that inspires meaningful change within teams. We all grow together when we can speak truthfully about areas that need improvement.

The informal 360 is a valuable tool for increasing leadership competency and a key to making yourself indispensable. At Allen Austin, we’re undergoing our own transformation and have implemented a compensation program designed to make every employee in the firm feel like an owner. The plan pays bonuses to all employees based on their quantitative and qualitative contributions to the firm. An important component of the plan is a formal feedback system in which each employee, including senior leaders are rated by their superiors, subordinates, and peers on leadership, management, collaboration, and culture shaping. The formal feedback loop is very important, and Scott’s article has augmented my thinking in a very good way. I hope it’s been helpful for you as well. 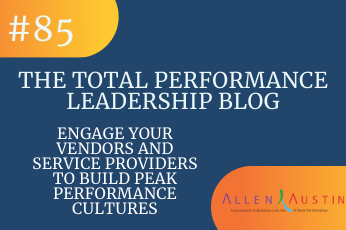 Your vendors and service providers, whom I’ll simply refer to as providers, could very well represent your most underutilized resource group. I began to understand this concept when, as an 18-year-old second assistant manager at a Safeway … 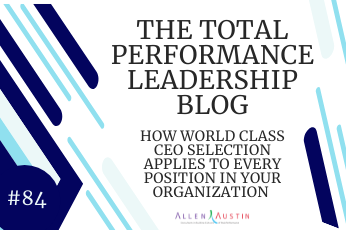 Paraphrased by Rob Andrews from Ram Charan’s October 2018 Harvard Business Review article. The article focuses specifically on CEO selection but is equally valuable when contemplating evaluating the critical needs for any position, at any level. While … 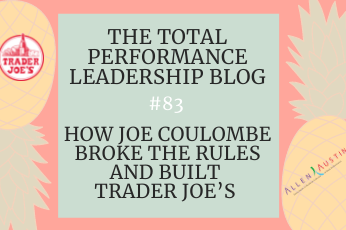 With paraphrased content from Becoming Trader Joe: How I Did Business My Way and Still Beat the Big Guys Harper Collins 2021 I must admit that even as a student of food and retailing, I didn’t pay …