With paraphrased content from Tracy Goss and David Allen

Last week we determined you must transform yourself before you can transform your organization.  Freeing yourself from your old winning strategy, starting with a clean sheet of paper, and declaring that you will accomplish the impossible, is necessary if you are to successfully transform. Transformation begins with the understanding that many of your aspirations that appear impossible aren’t, and that you are capable of far more than you imagine. It is only your current perspective, and lack of proper tools, that preclude you from achieving your highest personal and professional aspirations.

In 1981, I attended a week-long workshop conducted by Lou Tice, the late founder of the Pacific Institute. While I did not realize it at the time, this single workshop would have a profound and lasting effect on my life. Lou taught, as does Tracy Goss, and as does modern neuroscience, that we listen only for the things that are of value to us. We listen for things that confirm to our beliefs. The problem is our beliefs are almost always limiting. Much of Lou’s powerful research comes from the landmark work entitled Born to Win: Transactional Analysis with Gestalt Experiments by Muriel James originally published in 1971. I mention this in case you are tempted to read a fascinating yet very technical book on gestalt theory. Most people to whom I’ve recommended the book don’t get through it because it’s very dry; yet I would be remiss if I didn’t acknowledge it, as the concepts are woven throughout my own firm’s transformational architecture.

In May of 1957, Scientific American published an article describing the discovery of a “reticular formation” at the base of the brain, which is basically the gateway to your conscious awareness. In other words, it acts as a “switch” of sorts, to turn on and off your perceptions of ideas and data, like the thing that keeps you asleep even when music is playing but wakes you up if a loved one is crying in another room. As David Allen says of the reticular activating system in Getting Things Done, “Just like a computer, your brain has a search function, but that of the human brain is much more powerful. It is programmed by what we focus on and, more primarily, what we identify with. It’s the seat of what many people have referred to as the paradigms we maintain. We notice only what matches our internal belief systems and identified contexts.” Many leaders dismiss the importance of setting “impossible” goals, BHAG’s (big, hairy, audacious goals), or whatever else you’d like to call them. The realization that your reticular activating system exists, and the basic knowledge around how it works, illustrates why setting BHAG’s are so important.

Most leaders approach goal setting backwards, which is why they don’t receive the right data they need to accomplish what seems impossible. They look for the how’s before they set the goal. Lou teaches that setting a game changing goal that truly inspires, is a crucial step to personal transformation, and to seeing the roadmap to its accomplishment.  Tracy Goss says that if the goal is big enough, it will appear impossible, based on your current beliefs. The cool thing is that once you’ve set the goal and truly believe you can achieve it, all the how’s will begin to reveal themselves. Without the goal, the answers will be all around you, but you won’t see or hear them. Tracy teaches that paying close attention to what you’re listening for, will reveal much about your limiting beliefs.  “One person hears such a strong, piercing acute awareness of an opportunity that he feels like the opportunity is screaming at him. The other person barely hears because she is not “listening for” that opportunity. The screams come across as barely audible whispers.”

I began to use what I learned in Lou’s workshop formally in 1985 as an operating executive for the world’s third largest C-Store operator. During my first six years, I ascended through the ranks, managing four very disparate districts averaging 34 stores, and later two very different divisions totaling 516 stores in eight major markets across three time zones. In each case we were able to quickly accomplish what most thought impossible. Time and again, we were able to quickly and dramatically improve store standards, stakeholder engagement, customer experience, measurement systems, turnover, and operating results.

Each market transformation began with a declaration that made eyes roll. The declaration was followed by intense work with individual leaders and groups of store employees, to encourage, build people up, and instill confidence. As I reflect on those days, it was a blast. We worked long days, including nights and weekends for a while. We often hear “these things take time”, but we didn’t have time. We were in the middle of the 1980s oil bust and market conditions were ugly. This was one of those periods, not altogether different from the one we’ve been in lately, that you wish you didn’t have to endure. Yet it is in times of tremendous crisis and disruption that we learn and grow the most. The most rewarding part of the entire experience was watching the lights come on in people’s eyes as they realized they were capable of more than they ever imagined. Looking back, it was one of the most exciting, rewarding times of my career.

In coaching sessions and workshops I have conducted since, my first objective is to expand participants’ perception of what is possible. From the board room to the shop floor, human beings do not believe or behave according to reality. They behave according to reality as they perceive it. “That’s just the way I am”, or “that’s just the way it is” are parts of tapes that play in the minds of countless leaders who shortchange themselves daily because of the way they believe. I have also used these sessions to identify high potentials with great success, which will be the subject of a future post.

The purpose of this blog is to share what we’re learning about building cultures of peak performance. In future posts, we’ll dig further into how leaders who have undergone reinvention are building companies that dominate their sectors. These are organizations that practice the nine principles we’ve observed in organizations that outperform their peers: Unified Leadership, Disciplined Hiring, Leading with Purpose, Stakeholder Engagement, Cost Leadership, Measuring Everything that Matters, Customer Experience, Clarity in Everything, and Staying Ahead of the Curve. If you’d like to talk about how we can help your organization, or if you’d like a thought partner, please give us a call. 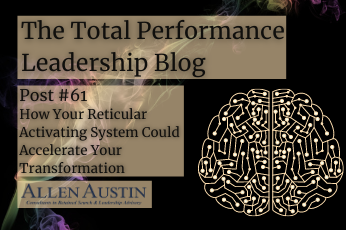 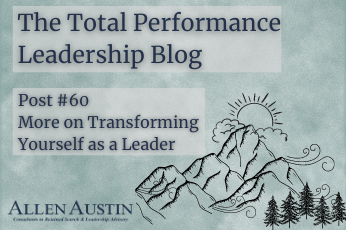