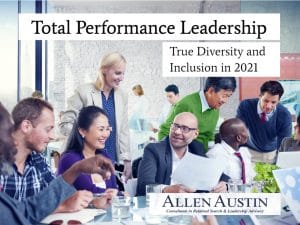 So how do we define diversity in 2021? For decades, we’ve been told that organizations that employ diverse leadership teams perform better. But what does diversity really mean these days? Total diversity now includes gender and race for sure. It also means diversity of thought, generation, culture, hardwiring, nationality, and more. Building a truly diverse leadership team is far more complex and more difficult than most realize, and it affects every sector of the planet: public, private, nonprofit, academic, private equity, and venture capital-backed – the works.

According to the EY 2019 Private Equity Survey, CFOs are finding it increasingly difficult to engage and retain talent. Although private equity can still attract bright, motivated graduates, they are no longer committing to a 25-year career within the industry. Ninety percent of CFOs in the EY (Ernst & Young) survey expect new hires to stay for less than five years which makes developing talent difficult and the logic behind it questionable.

Beyond just hiring great talent, is the need to fully engage truly diverse workforces. Attracting and motivating diverse workers will be key to building the company of the future; and the old, worn-out definition of diversity no longer applies. In the early 1990s, when we spoke of diversity, it was all about gender, race, and affirmative action.  Today, it’s about total diversity: gender, race, ethnicity, geography, generation, sexual orientation, hard wiring, the whole works.

Millennials, for example, (also known as Generation Y) are the demographic cohort following Generation X and represent the largest generation in history. There are no precise dates for when this cohort starts or ends; demographers and researchers typically use the early 1980s as starting birth years and the mid-1990s to early 2000s as ending birth years.

Jason Dorsey, who has built a wildly successful consulting practice focused on helping us understand, motivate, manage, sell to, communicate with, and otherwise deal with multiple generations says that those who get the generational nuances will win, and those who don’t, won’t. Dorsey’s research facility called the Center for Generational Kinetics has determined that we will be dealing with seven different generations in years to come. Generations, which he says are no longer determined by birth years, but by context and behaviors.

Several important trends have been identified by Dorsey and his team. The first one is diversity. Baby-boomers may yawn at this but they do so at their own peril. The emerging generation is the most diverse in history. What this means is that the only thing the I generation (the emerging generation) notices about diversity is the lack thereof. This generation will not remember a time in which we have not had an African-American president, gay marriage, or Facetime. They will not remember a time in which their school didn’t look like the United Nations. For decades now, diversity has been a good business idea and a sound strategy. Going forward, it’s a necessity.

The second trend Jason’s research has surfaced is technology, but in a much different way than most of us think. Millennials, contrary to popular belief, are not necessarily tech-savvy, they are tech-dependent! U. S. Gen Y numbers approximate 80 million people, the largest in history. These are in fact the folks who are going to be in charge if they’re not already. Dorsey’s research suggests that Gen Y is splitting into two groups. About half are doing what they’ve been told they ought to do, albeit a few years later and within the context of the millennials as you and I think of them. The other half, typically at around age 30, are self-selecting out of the stereotypical millennial group and can no longer identify with them. The group that has self-selected out is becoming increasingly driven to work hard, build businesses, become self-sufficient, and influence others. Now here comes the good part, or the scary part, depending on your perspective. The younger generation is changing the way the older generations operate, and there is no way to avoid it. Dorsey says that not getting this is going to put many companies out of business. He says that smart companies will change the dialogue altogether. Smart companies will no longer talk about the differences between generations, gender, or ethnicity, but will begin to harness the power of the totality of diversity.

Rajeev Vasudeva, CEO of one of the largest leadership consulting firms in the world, opened his 2017 Board Diversity Study by saying: “This last year has seen the world repeatedly proven wrong on predictions for leadership. One thing is clear: There is a need to redefine what great leadership looks like.”

In today’s business environment, a modern organization can only be as successful as its leader’s ability to navigate near-constant change. In our work advising senior executives and boards around the world, we see leaders struggling to find the path to growth and unlocking their organization’s potential through more effective leadership.

What is happening here? We are witnessing a dramatic shift occurring in what it will take to lead the boardrooms and organizations of the future. No one leader can be the catalyst for the entire organization’s success anymore. Leadership today entails moving the focus from individual excellence to building a culture of high-performance teams and collaborative success. This can only be achieved if we cultivate more diverse and inclusive leaders who can recognize and nurture the best in people. Yet despite social and economic progress in other areas of the business world, diversity at the leadership level, particularly in the boardroom, has not kept pace.

In Vasudeva’s Global Board Diversity Analysis, his most comprehensive to date, we see that, sadly, progress is slow. In some countries or regions, there is virtually no improvement. Change in the gender diversity of boards is not occurring at the rate commensurate with how the world is evolving in many other ways.

There are indeed positive gains in the overall picture that should be acknowledged: Vasudeva’s findings show that 84 percent of all large company boards globally (market capitalization of at least EUR 6bn) include at least one woman director, up from 76 percent in 2012. However, our experience and independent research suggest that, for gender diversity to start to have a meaningful impact on governance, a board must have three women directors.

Leaders who can drive sustainable growth today need to be masters at collaboration and make everyone on their teams feel like they belong and can make a real contribution. They must also have the ability to influence diverse constituencies while remaining adaptable and nimble in the face of change. Leaders who bring diverse experiences and perspectives are better positioned to work in these ways.

For diversity to be a source of competitive advantage for the organization, it needs to start at the top with the board. We continue to be an advocate for greater diversity and inclusion on boards, and throughout the leadership ranks.

“We’ve totally screwed up,” said VW America boss Michael Horn, while the group’s chief executive at the time, Martin Winterkorn, said his company had “broken the trust of our customers and the public”. Mr. Winterkorn resigned as a direct result of the scandal and was replaced by Matthias Mueller, the former boss of Porsche. “My most urgent task is to win back trust for the Volkswagen Group – by leaving no stone unturned,” Mr. Mueller said on taking up his new post.

The Volkswagen board, which numbered twenty members was a perfect example of what often happens when a board or leadership team lacks diversity. Nineteen out of twenty members were German, and one was Austrian. There were no females, no one under 40, and no Americans, even though 55% of Volkswagen’s market is the United States. Totally homogenous groups often fall victim to groupthink, fail to challenge one another, and have a very myopic view of the world in which they operate.

Presented in this piece are at least five very different perspectives on diversity. You notice that only one spoke of generational diversity. None spoke of hardwiring and thought. The best teams, whether focused on board-related activity, investment strategy or operating tactics are carefully crafted to leverage the broadest possible diversity while being united with a common purpose and vision and holding homogenous values. A tough balancing act for certain.

We hope that this piece has been interesting, thought-provoking, and perhaps even useful. 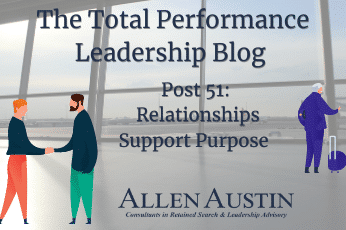