TPL Insights: Building Peak-Performance Cultures #141 – Use the Threat of a Recession and Mindset to Build Competitive Advantage

I read Alan Murray’s Fortune CEO magazine regularly and was struck by his report today. Alan says he’s been looking for evidence that the threat of recession is causing companies to pull back on investments in technological transformation or ESG. But he can’t find much. Alan says the best companies seem to be viewing a downturn as their chance to build a competitive advantage. At the Fortune Global Forum dinner in San Francisco last night, McKinsey’s Alex Singla quoted racing legend Ayrton Senna: “You can’t overtake 15 cars in sunny weather…but you can when it’s raining.”

Nvidia CEO, Jensen Huang, was the featured guest at the dinner and treated those attending to a rollicking discourse on how A.I.—powered by Nvidia products—is about to take over the world. If Huang felt any concern about the impending recession, he certainly didn’t show it. Instead, in his interview with Fortune’s Michal Lev-Ram, he gave a sense that the world was on the verge of a kind of Cambrian explosion, with Nvidia technology at its core:

Earlier in the day, Alan was at Oracle’s Cloud World conference in Las Vegas, as was Huang, coincidentally. While Huang was there, Oracle announced plans to deploy tens of thousands of Nvidia’s top-of-the-range GPU processors to power A.I. in the Oracle cloud—a testament both to Nvidia’s central role in A.I. computing and Oracle’s rising position in the cloud business. Alan had the opportunity to talk with Oracle CEO Safra Catz, who was as ebullient about her company’s place in this brave new world as Huang was about his. When he asked her how a recession might affect that business, she said it would only increase the company’s advantage:

“Many of the companies who are paying tens of millions of dollars to our competitors will actually cut their bill by 60% by coming to Oracle. When technical people give us a chance, we’re winning.”

Alan asked if being late to the cloud business put Oracle in a better position than its competitors. Her answer: “I know this sounds insane, but yes. You know why? Because first of all, we got to pick some of the best people that had done it before. And we said to them, please don’t do what you did. Don’t copy. We want you to build it as if you knew then what you know now.”

It was the first time Alan had interviewed Catz, who generally avoids the press. She told him:

“I don’t usually do a lot of public stuff. We have Larry Ellison. He’s the real genius of this operation. Seriously. Do not let titles fool you. There are visionary founders. And then there are these unique folks who are not only visionary founders, but unbelievable businesspeople. He’s one of those…I know I’m a manager and I’m not Larry Ellison.”

Believe me, I’m not confused. That may be true. But Alan came away convinced that she is the competitor that other cloud companies should keep a close eye on. Alan was at the Oracle event for a fireside chat with Deloitte CEO, Joe Ucuzoglu, sponsor of this newsletter. I asked him about the issue I wrote about here yesterday: Are companies pulling back on their ESG commitments, either because of impending recession or because of political pushback?

His response: “We live in a society that more and more is polarized and wants to pull the debate toward the margins. But whether you think business’s purpose is to take really good care of communities or think that business’s purpose is to deliver extraordinary returns to shareholders, those things actually aren’t that far apart. If you’re not talking about next quarter, if you’re talking about a long-term time horizon, the businesses that are looking at where society is going, that are headed toward a decarbonized future, that are headed toward a fundamental prioritization of ESG and humanity and the type of society that we all want to live in…those who find a way to put that into their business models will actually be more successful at driving returns for their shareholders in the long term.”

Alan’s article really got me fired up and I wanted to share it with you. One of the great things about being “seasoned” is realizing that business is cyclical. We all have ups and downs. I’ve been in and around the human capital consulting profession for 43 years and have seen six major economic dips that ran many of my competitors out of business. What’s interesting is there are always companies that use a downturn, or threat thereof, as a catalyst to take their businesses to new levels. In 2003, I met a man who ran a firm similar to mine in Toronto. I was surprised to hear from him that he’d had record years in 2001 and 2002, which were two of the worst years in our history. When I asked him how, he replied by saying: “Think about it Rob, when half your competitors either quit or quit trying, there’s more business out there than before”.

And there you have it. Mindset has everything to do with the way we see ourselves, our businesses, and our futures. No one climbs to the top of any profession without suffering trials, tribulations, and setbacks. If we are to achieve our full potential, we will learn how to think, how to control self-talk, and how to program ourselves to live the lives we want, rather than the ones we may be headed toward. In 1981, I attended a seminar in Seattle that forever changed my life, for I learned that we could change the way we believe, altering the way we are being.

All the work we do here at Allen Austin is about building peak performance cultures, which begins with a single step on a journey that never ends. Give us a call and let’s talk about your journey. 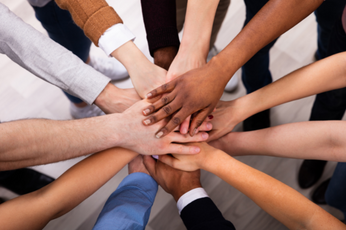