TPL Insights: Building Peak-Performance Cultures #116- The Case for Bolder Leadership, Much Bolder! Part 1 The Six Mindsets That Distinguish the Best Leaders from the Rest

In the new book `CEO Excellence: The Six Mindsets That Distinguish the Best Leaders from the Rest,’ three McKinsey senior partners share insights based on 20 years’ worth of corporate performance data and in-depth interviews with 67 of the most successful chief executives of the 21st century. All aspects of the role are covered, including setting direction, aligning the organization, mobilizing leaders, engaging the board, connecting with stakeholders, and managing personal effectiveness. In this excerpt, they explore one aspect of direction setting: how the best CEOs approach strategy.

On May 25, 1961, before a joint session of Congress, U.S. President John F. Kennedy clearly stated his vision: “To win the battle that is now going on around the world between freedom and tyranny.” What was his strategy? A series of big moves, one of which has become synonymous with the very idea of taking a giant leap forward: the moonshot. During his speech that day, Kennedy not only asked for funding to put a man on the moon but also for three related big moves: increasing unmanned space exploration, developing a nuclear rocket, and advancing satellite technology.

The story shows how a mindset applies not just to vision but also to the strategies employed in pursuit of it. Like Kennedy, the best CEOs make big strategic moves early and often during their tenures, and an analysis of 3,925 of the largest global companies over a 15-year span bears this out. In their book Strategy Beyond the Hockey Stick: People, Probabilities, and Big Moves to Beat the Odds, our McKinsey colleagues ran the numbers to determine which big strategic moves yield the highest probability of a company jumping from an average to a top profit generator. Their research identified five strategic moves that matter most, if they’re pursued with a “man on the moon” kind of boldness.

Buy and Sell The best CEOs execute at least one deal per year on average, and over a 10-year period these deals cumulatively amount to more than 30 percent of a company’s market cap. This puts a premium on having a deep capability to identify, negotiate, and integrate acquisitions. The top CEOs are as bold about selling as they are about buying. Aon is a poster child for making deals, executing more than 220 acquisitions and 150 divestitures over the past 15 years. “We’re always shaping and improving our portfolio,” says CEO Greg Case.

Invest If you want your company’s investments to be big enough to move the needle, your capital expenditures-to-sales ratio needs to exceed 1.7 times the industry median for 10 years. General Motors CEO Mary Barra exemplified this strategic move when she committed more than half of GM’s product development capital through 2025 to “an all-out pursuit of global electric vehicle leadership.”

Improve Productivity The most successful companies reduce administrative, sales, and labor costs more deeply than others, and in so doing achieve 25 percent more productivity improvement than their industry’s median over a 10-year period. This is exactly what Allianz’s Oliver Bäte did soon after he became CEO. In an industry that had seen flat expense ratios at 30 percent for decades, Bäte drove the ratio below 28 percent while increasing customer loyalty from 50 to 70 percent and internal growth rates from negative levels to 6 percent between 2015 and 2019.

Differentiate The best CEOs improve their business models and create pricing advantages in ways that are big enough to change the company’s trajectory. As a result, their companies achieve an average gross margin at least 30 percent higher than those of their respective industries over a decade. Former LEGO CEO Jørgen Vig Knudstorp used this strategic move well in pursuing what he called “a strategy of niche differentiation and excellence” that aimed to refresh at least half the company’s core products every year. He created, for example, digital platforms that strengthened communication among LEGO fans, developed products for girls, licensed collections (e.g., Star Wars), and launched the successful LEGO movie franchise.

Allocate This move is deemed big when a company shifts more than 60 percent of its capital expenditures among business units over 10 years. Doing so creates 50 percent more value than what companies that reallocate more slowly achieve. Resource reallocation involves more than just capital, however; it also means shifting operating expenditure, talent, and management attention to where it does the most good. As such, it’s a vital enabler of the other four big moves.

CEOs who make too few moonshot-size moves—or make them too late in their tenure—fall behind the pack. Furthermore, those who make these moves earlier in their tenure outperform those who move later. The best CEOs don’t only venture into uncharted waters—they are also willing to stay the course on stormy seas. In his strategic push to make his UK spirits company more customer-centric, Diageo CEO Ivan Menezes diverted commercial and marketing efforts away from distributors and toward consumers. As sales declined in the short term, Menezes found himself under fire from investors and faced skepticism inside the company. “The entire organization was watching to see if we’d blink,” says Menezes. “But we stuck with it, explained why, gained credibility, and really set the foundation for growth.”

Since then, Diageo has achieved top-quartile shareholder returns in its peer group. The many related stories we hear from CEO after CEO remind us of the definition of courage offered by Piers Anthony, author of the Xanth fantasy series: “Being terrified but going ahead and doing what needs to be done—that’s courage. The one who feels no fear is a fool, and the one who lets fear rule him is a coward.” Former CEO of Medtronic Bill George puts a fine point on the importance of this aspect of the role. “I’ve seen some otherwise very well-qualified CEOs who lacked courage and their companies managed for a while but atrophied over time,” he says.

Where do the best CEO get this courage? We found that it comes from four sources: being exceptional futurists, keeping an eye on the downside, acting like an owner, and consistently applying “heart paddles.”

BE AN EXCEPTIONAL FUTURIST

Virtually every CEO we spoke to emphasized the importance of having a clear point of view on where the world is going. Top CEOs keep careful track of shifts in technology, changes in customer preferences, new competitors, and threats on the horizon. Doing so enables them to place bets before these trends become conventional wisdom and to maintain conviction when others inevitably criticize their choices.

Over the course of his 23 years in the CEO role—at General Instrument, Tyco, and DuPont—Ed Breen consistently capitalized on trends. In 2017, for example, after studying the economics of the agriculture industry, he concluded that it would consolidate down to just a few players. At the time, agriculture represented two of DuPont’s seven divisions, but it accounted for more than 50 percent of the company’s equity value. Breen worried that restructuring the agriculture business could negatively affect DuPont’s stock in the short term, but it became clear to him that merging with Dow Chemical and spinning off what is now Corteva Agriscience was the way to go. Investors were skeptical, but Breen was convinced that the move made sense for both companies.

In what some analysts have called the most complex corporate deal ever, Dow and DuPont merged into a single entity, were reconfigured, and then split into three separate companies: Dow (commodity chemicals), DuPont (specialty chemicals) and Corteva (agriculture seeds, traits, and chemicals), all of which were better equipped to compete in their respective fields. Looking back at his career, Breen reflects, “CEOs make important decisions every day, but some decisions are just so huge that nothing else even comes close. I’ve made approximately 15 really major decisions in my career. Those big ones had better work.” Breen’s have, in large part because he was able to see around corners.

All the excellent CEOs we spoke to had similarly lucid views of what the future would bring. Where do they get their crystal ball? The answer is more straightforward than many might think. Feike Sijbesma, former CEO of Dutch life and materials sciences powerhouse Royal DSM, whose shift of the company’s focus away from bulk petrochemicals not only benefited shareholders but the planet and society, recalls pondering early in his career how to develop a vision and a strategy: “Do you sit in your study and yell, ‘Eureka! I have it?’ I don’t think that’s how it works.” He started reading broadly, looking for surprising connections, traveling, and connecting with people in business, science, and society. “That’s how we got the idea to move out of petrochemicals and use the proceeds to move to nutrition and health,” he says.

The best CEOs hardwire their view of the future into their companies’ strategic planning. As Sundar Pichai, CEO of Alphabet, and its subsidiary Google, describes it: “I think about our mission and the fundamental trends we’re seeing, and based on that I write down the five to ten themes that we really want to execute on well.” Pichai next works with his management team and nominees from various levels of the organization to sharpen his themes. With those ideas in mind, each part of the organization develops a set of objectives and key results (OKRs) that are ambitious and shared internally. Pichai then reinforces the themes in all review conversations: “If ‘Asia Pacific–first’ is one of our five themes, I could be in a YouTube review and probe the team: ‘Can you tell me how you’re solving for Asia Pacific first?’” 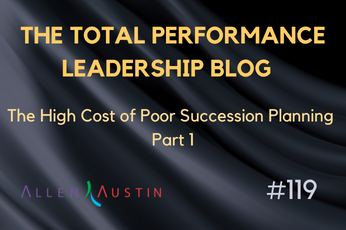 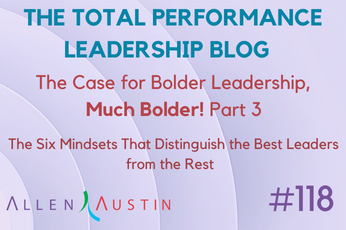