One of my business partners recently introduced me to the Arbinger Institute, where he studied and learned about the concept of self-deception. It seems we all slip into self-deception multiple times each day, even if we have been trained not to! Self-deception causes people and organizations to get stuck, in old patterns, old behavior, old thinking, and old prejudices. To escape self-deception requires herculean effort, a new paradigm, better training and development, and better systems.

Organizations comprised of people who possess more or less the same mindset they’ve always had will continue to produce more or less the same results they’ve always produced. If they’ve struggled with the very common challenges of prejudice, low engagement, poor collaboration, and lack of innovation, these problems will continue – unless they change what’s actually causing the problems.

The cause of remaining stuck in all of these maladies is a self-focused inner mindset. Breakthrough results, including dramatic reductions in prejudice, can only take place when people shift from an inward mindset to an impact-focused outward mindset. The Arbinger Institute enables positive change through a  three-step process: mindset change, leadership development, and systems improvement. The latter two are beyond the scope of this post.

We are most definitely navigating turbulent waters, and for our racial issues, there is precedent. Repeating the precedent is unfortunate as we don’t seem to have learned much from our past experiences. Issues that have plagued us for a very long time are surfacing in a manner that is requiring all of us, as a human family, to look more carefully at ourselves, our society, our institutions, our businesses, and how we see one another.

According to this month’s (July 2020) special edition of the Arbinger Newsletter, we have forgotten we are a family. As a family, we have forgotten empathy, understanding, and listening, to allow self-deception, and the evils of racism, bigotry, and other forms of prejudice into our house. Addressing these evils requires an understanding that these are merely symptoms of a much deeper problem – that of dehumanization.

Dehumanization is a fundamental blindness to the humanity of others – to see a person’s color, religion, nationality, politics, or other distinguishing attributes, instead of seeing a person, another child of God, and a family member. It is to believe that others, who don’t look like us, think like us and/or believe like us, don’t matter like we matter, that others don’t count the way we count. It is the objectification of others and unchecked spreads like wildfire. When we see people, who are different as less than, or less worthy, we encourage the mistreatment of others even if we’re not aware of it.

With the current focus on racial unrest in the United States in the wake of George Floyd’s murder, it would be easy to see this as a uniquely American issue, or one that is temporary, one which will subside. The reality is that the underlying problem of dehumanization is neither local nor short-term. All over the world and throughout history we’ve witnessed the animosity of dehumanization and the objectification of those we deem as “other”. Arbinger asserts that identifying and rectifying racism and dehumanization of every kind is the obligation of all of us, at all times. Not only right now, but especially right now. This will be a very long conversation. As I finished reading this month’s Arbinger letter, I was struck by a short video entitled: Turn the World Outward.

It is my belief, that if every human being on the planet were to watch this video about Daryl Davis, attached to this post, the world would instantly become a better place. As an African American youth who spent his earliest years overseas, in culturally diverse communities, Daryl had no real exposure to racism until he was ten years old. Once he returned to the U.S. in 1968 and experienced racial prejudice, he couldn’t understand how people could hate him simply because of the color of his skin. For the first time in his life, Daryl’s parents sat him down and explained what racism was. His ten-year-old brain couldn’t imagine what his parents were describing. On April 4th of that year, Dr. Martin Luther King Jr. was assassinated, and the nation erupted in violence and destruction.  Daryl still didn’t understand the basis for racism and has spent the last fifty-one years trying to understand it. Watch this ten-minute video and see for yourself what can happen once two people actually see one another as human beings, different yet belonging to the same family.

What we need right now is calm, steady leadership; not panic, hysteria, and rush to judgment. We need our leaders to tell us we’re going to be ok, that this too will pass, and that we can emerge from our current crises better and stronger than ever. We need leaders who let us know what they expect of us.  Nancy Koehn wrote an article in the April edition of Harvard Business Review that speaks to this issue very effectively. I’ve taken her content and added a few thoughts of my own.

We are living through a global health crisis with no modern precedent. What governments, businesses, hospitals, schools, and other organizations need right now are what the writer David Foster Wallace called “real leaders” – people who “help us overcome our own individual laziness, selfishness, and fear and get us to do better, harder things than we can get ourselves to do on our own.”

Real leaders are not born; the ability to help others triumph over adversity is not written into their genetic code. They are instead, made. They are forged in crisis. Leaders become “real” when they practice a few key behaviors that gird and inspire people through difficult times. The good news is that we have models for this kind of leadership. Here’s what we can learn from how some of history’s most iconic leaders acted in the face of great uncertainty, real danger, and collective fear.

Acknowledge people’s fears, then encourage resolve. Decide to become a part of the solution and refuse to become mired in the problem. Times of uncertainty and crises require leadership that keeps people focused on moving ahead and doing what is necessary to emerge victoriously. Most of us know the famous lines of United States President Franklin Delano Roosevelt’s 1933 inaugural address in the midst of the Great Depression: “The only thing we have to fear is fear itself.” He followed that by pointing to the nation’s strengths in meeting the crises: “This is no unsolvable problem if we face it wisely and courageously. There are many ways in which it can be helped, but it can never be helped merely by talking about it. We must act and act quickly.”

Less than a decade later, as the United Kingdom stared down Hitler’s onslaught during the Second World War, Prime Minister Winston Churchill encouraged his people to keep the faith: “We will not fail or falter; we shall not weaken or tire. Neither the shock of battle nor the long-drawn trials of vigilance and exertion will wear us down. Give us the tools, and we will finish the job.”

Your job as a leader of your own organization is to begin with you. One of the great leaders we’ve studied for the Total Performance Leadership architecture said something to me I’ll never forget. “Anytime there is something wrong with my organization, I reflect on what’s wrong with me. Am I painting the picture well enough? Is my leadership strong and clear? Am I leading with the right example? Am I measuring the right things? Am I rewarding the right behavior and correcting the wrong behavior? I’ve always got to be the one that sets the right example. My behavior sets the tone for the rest of my 7,500 employees.”

Your job then is to provide both brutal honesty- a clear accounting of the challenges your locality, company, non-profit, or team faces – and credible hope that collectively you and your people have the resources needed to meet the threats you face each day: determination, solidarity, strength, shared purpose, humanity, kindness, and resilience. Recognize that most of your employees are anxious about their health, their finances, and, in many cases, their jobs. Explain that you understand their fears, but that you can work together to weather the storm. That this too will pass.

Give people a role and a purpose.  Real leaders charge individuals to act in service of a broader purpose. They give people jobs to do and hold them accountable. During the U.S. Civil War, President Abraham Lincoln exhorted and ordered men of Northern States to fight; as the Civil Rights movement gathered momentum in the late 1950s and 1960s, Rev. Martin Luther King, Jr, asked his followers to sit in, march, and protest racial discrimination. In his first inaugural address, FDR told his countrymen to keep their money in U.S. banks to avert a banking crisis. Later, his wife, Eleanor Roosevelt, encouraged American women to work in the nation’s factories, while their fathers, brothers, husbands, and sons went to battle in the Second World War. During the days that followed 911, when much of the country was paralyzed with fear, President George W. Bush, when asked what he expected of us, told his fellow Americans to “live your lives, go out and eat, shop in our stores, see our sites, and support your fellow Americans.”

Fifteen years after 911, one in five Americans cite the country’s response to the terrorist attacks of September 11, 2001, as the time in their lives when they felt most proud of their country, this according to a Pew Research Center poll conducted in 2016. Overall, the survey found that the 911 attacks united Americans in a way few historical events have. In the aftermath of the attacks, Americans rallied around George W. Bush, evidence by his 86% approval rating shortly after the attacks, a rating only eclipsed by George H.W. Bush’s 89% approval, following the Persian Gulf war in 1991. Regardless of how we fell about the Bushes today, clearly their leadership resonated and unified a nation. We knew that we were in troubled times, but that we had a purpose and a job to do.

Through our study, Total Performance Leadership, we have met several organizations who strive to stand out among others in their efforts to maintain and build a great reputation, company culture and improve their hiring processes. The process starts with a growing and positively changing hiring. 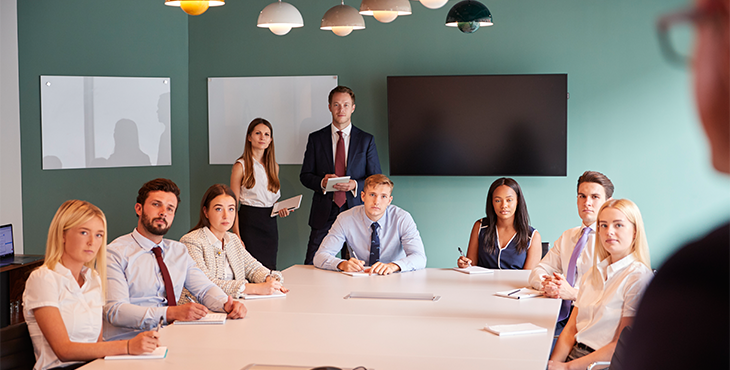