Last week, through Raj Sisodia’s research, we established that businesses that operate with a purpose greater than just making money, practice a balanced stakeholder approach, focus on building strong cultures, and lead with the intent of elevating humanity outperform the S&P 500 Index by a factor of 10.5.

In 2014, when Firms of Endearment was published, Raj Sisodia began his prologue by saying “The future is disorder. A door like this has opened only five our six times since the beginning of mankind. It’s the best possible time to be alive when almost everything you thought you knew is wrong.” Sisodia believes we are in the dawn of a new era, and he’s not alone. These findings are consistent with at least two dozen modern thought leaders, and our own research around organizations that practice the nine principles of Total Performance Leadership.

Since the 1990s, no major field of human endeavor has been spared from predictions of its extinction, not literally but in terms of its nature. The world of business is no exception. Peak performing companies are closely examining their fundamental purposes and the manner in which they operate. Raj believes that it is not overreaching to suggest a historic social transformation of capitalism is underway.

Companies we will highlight later in this series, that have broadened their purpose beyond the creation of shareholder wealth are not outliers. Rather, they are the vanguard of a new business mainstream. The dramatic upsurge of interest in spirituality in the U.S. that’s spawned today’s megachurches is an indication that something big is happening in the bedrock of our culture. Numerous consumer surveys report that people are looking less to things and more to experiences to achieve satisfaction in their lives.

Business leaders are not isolated, as they drink from the same cultural waters as the customers they serve and the employees they lead. Tomorrow’s leaders of peak performing cultures will be champions of a new, humanistic vision of capitalism’s role in society. Former Timberland CEO Jeffery Schwartz unabashedly said that his company’s mission was to make the world a better place. Schwartz and the other executives we’ll cover in this series are not starry-eyed do-gooders. As Sisodia points out, they are resolute, highly successful, hard-charging, business professionals with exacting standards, who augment their human-centered company vision with sound management skills and an unswerving commitment to do good by all who are touched by their companies.

The leaders that Raj Sisodia writes about, who consistently outperform their peer groups, strive through their words and deeds to endear themselves to all of their primary stakeholders- customers, employees, suppliers, communities, and shareholders – by aligning the interests of all in such a way that no stakeholder group gains at the expense of another; rather they all prosper together. These exceptional leaders are driven as much by what they believe to be right as by what others might more objectively claim to be right.

Consider for a moment that Firms of Endearment was published in 2014, six years before the term COVID-19 was uttered. At that time, Raj said that humankind is entering a realm where no one has gone before. He said that the landscape is as unfamiliar to us as the world we’ve known would be to a time traveler from the eighteenth century. Factor into the equation that three billion members of the global workforce are going to emerge from the coronavirus pandemic changed forever.

Millennials, in particular, born between 1981 and 1996, make up the largest generation in history and are projected to soon comprise the largest percentage of our workforce. By and large, millennials have experienced a time in which the world enjoyed relative peace and saw increasing prosperity; and have never experienced a time in which they had to consider their own mortality or the current economic mayhem. I mention millennials because they have had a profound impact on our workforce culture. That said, we will all emerge from this crisis with new priorities. Relationships, purpose, connectedness, safety, and community will have new meaning.

Scientific discovery and technological development have been the primary catalysts in the evolution of culture over the last 200 years. Increasingly, demographic changes are playing a huge role in reshaping the global culture, and it’s not just millennials. We also have more workers over 55 than ever before, and older workers’ attitudes around what is important have morphed significantly.

Daniel Pink, the author of six highly provocative books linking business and human behavior, writes enthusiastically about society moving from the more rational perspectives commonly associated with the left brain to the more emotional, intuitive perspectives associated with the right. He argues that U.S companies need to move more toward right-brain values to gain an advantage over companies abroad who want to build relationships with American consumers.

As Pink sees things, U.S. companies must connect with that he calls the six senses of the Conceptual Age in product design, marketing, and customer experience. These six senses are design, story, symphony, empathy, play, and meaning. Stay tuned for more next week. 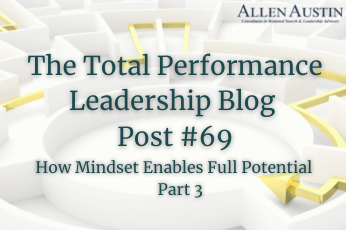