Growth of Energy No Longer Directly Coupled to Economic Growth – What does this mean for the Industry?

Bloomberg New Energy Finance (BNEF) recently released its 2016 Sustainable Energy in America Factbook. The most striking statistic (followed by numerous charts and graphs) were the parting of ways between economic growth and energy (and electricity) usage. “The U.S. economy has now grown by 10% since 2007, while primary energy consumption has fallen by 2.4%,” according to the Factbook. The seeming cause of this divergence is improvements in energy efficiency. While energy usage has remained flat, so has electricity usage. This has not always been the case because electricity had a compounded annual growth rate of 2.4% from 1990 to 2000. For most of the last 50 years’ electricity usage tracked very closely to GDP growth. 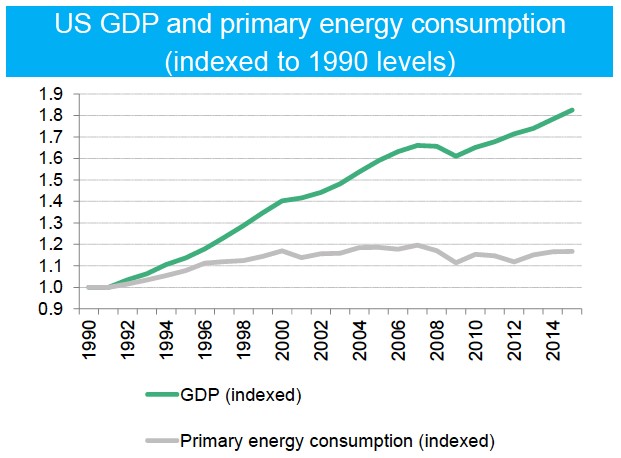 CREDIT: BNEF
This decoupling has been an important factor in the decrease of overall greenhouse gas emissions in the United States since 2005. Also, flat electricity demand has meant the increased usage of renewables and natural gas power corresponds with the decreasing usage of coal. (Explained by this 2016 Energy Information Administrative graph below.)

Energy efficiency policy and investment is the main reason behind the decoupling of GDP growth and electricity use. “Natural gas and electric utility spending on efficiency reached $6.7bn, up 8.1% from the $6.2bn seen in 2013; Energy Savings Performance Contracting (ESPC) investment topped $6.4bn,” notes BNEF in 2014.

Also according to the BNEF, “since 2007, incremental efficiency achievements have risen 17% on average annually.”

“The key policy story of the past decade has been the uptake of EERS [Energy Efficiency Resource Standards] in US state targets and decoupling legislation among US states,” BNEF explains.

As Climate Progress says, “Utility ‘decoupling’ is a change in regulations that delinks a utility’s revenues from the amount of electricity they generate and sell. Absent decoupling, utilities (like most businesses) are highly incentivized to sell more of their product — in this case, power — to make more money. That in turn disincentives utilities from putting money into energy efficiency; decoupling removes that disincentive.” BNEF states that with EERS, “utilities are required to implement energy efficiency measures, typically among their consumers, equivalent to a target volume of kWh (usually specified as a fraction of the previous year’s kWh sales).” 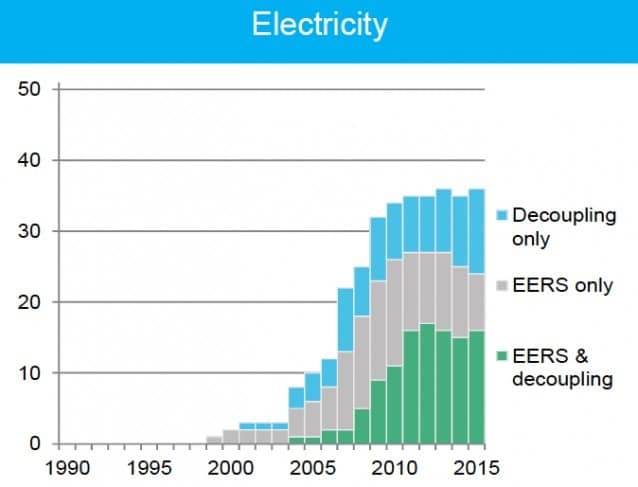 Investments in energy efficiency, driven by utility decoupling paired with EERS, has enabled electrical use to become independent of economic growth. What is important to remember is that on the whole, the U.S. has succeeded with this departure, but many individual states haven’t promoted energy efficiency. States such as Oregon, Idaho, California and Vermont have clearly incentivized energy efficiency, and there is still room in the industry when other states do the same. Even California, which leads in efficiency policies, passed a law in 2015 to increase building energy efficiency by 50% in 2030 for both residential and non-residential properties.

Energy efficiency is the wave of the future- inexpensive, carbon-free, and easy to disseminate since it doesn’t require new transmission lines. The industry is creating new technology everyday, and more people and devices are adapting to clean energy than ever before. This trend of energy and electricity demand departure from the economic growth is expected to continue for the foreseeable future- making our energy bills and CO2 emissions, perhaps, decline.

Allen Austin is a unique consulting firm with specialties in retained search and strategic transformation. Our core purpose is to improve the lives and effectiveness of our clients, associates and the leaders of the world. Our mission is to help leaders build high performance, purpose driven organizations that produce unprecedented results. We are trusted advisors to boards, CEO’s and senior leaders of companies small and large, public and private, family owned, domestic and international. Our brand stands for results, integrity, personal service and long-term relationships.